On the streets of Portland - Demotix News 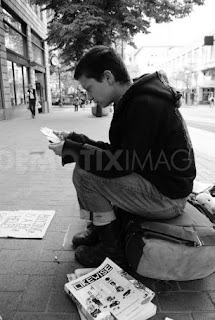 On the streets of Portland

Life on the streets for a young woman struggling with homelessness and an addiction to heroin in Portland, Oregon, USA.

After leaving her home near Toronto at age 15 due to family strife Niki has been living on the streets for 10 years. She came to Portland after meeting her 42 year old boyfriend Christian on the Internet. She says that even if they hadn’t met she probably would have still ended up in Portland. Niki goes on to explain that the pleasant climate and easy access to heroin are just a few of the things that make the area attractive to her. As she sits down to claim her usual spot outside of Michelle's on 5th , store employee Hasib Haider comes out to greet her. Hasib says he doesn’t like most of the people that set up outside of the store but Niki keeps to herself and doesn’t bother the customers.

Within a few minutes of placing an empty hat out on the sidewalk to collect change in a young lady walks by and directs insults her way, shrugging it off She tells me “ ya gotta take the good with the bad". as we spend the afternoon chatting I notice the hat she put on the sidewalk is almost full. I tell her I’m impressed With the amount of money she has in the hat, she retorts "I’m not proud of that, I’m living this way because I have to, I’m just doing what It takes to survive". She turns to me and asks what I would have done if I was put into her situation? I don’t respond because we both know the answer.

As the afternoon goes on she rolls up her sleeve to reveal the tell tale signs of a heroin addiction.
Niki see’s me looking at her track marks, she says that she has been clean for about 3 weeks. I can tell from the dried crusty blood in the crook of her arm and the fresh track marks that this is not true.This would be the last time I see her. After almost a week of searching and asking around I run into her boyfriend Christian, he tells me that in an attempt to get clean Niki has returned to her home near Toronto.