Getting Soaked by Clean & Safe 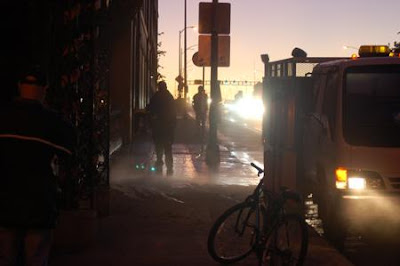 In Safe Hands Posted by Matt Davis on Thu, Oct 23 at 10:31 AM I was up at 4:30 yesterday to follow the city's Bureau of Housing and Community Development along on a vulnerability survey, looking for the people in Portland most likely to die on the streets over the winter. It's the first time the city has done a survey like this, and there'll be more on it in next week's paper. But in the mean time, I wanted to relate this incident. By 7:15, the volunteers I was with had surveyed about 25 people sleeping on the streets outside the Portland Rescue Mission on West Burnside, when a Clean & Safe van showed up to hose down the sidewalk: 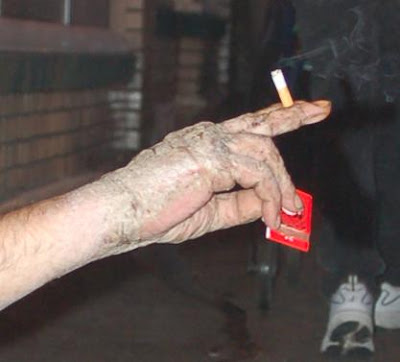 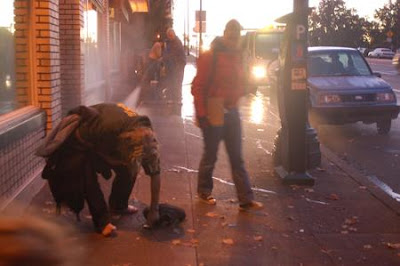 Among those sleeping on the street outside the mission was a barefoot man, whom I'd estimate to be around 55-60 years old, whose hands appeared to be suffering severe infection. He seemed to be suffering, too, from confusion, was very difficult to re-direct, and when asked if he'd seen a doctor, said "God will take care of me." His hands were weeping pus and blood, and covered in these scales:

Nevertheless, come hose time, the Clean & Safe crew made no allowances for the man, and appeared to show no interest whatsoever in his medical welfare. He was forced to stand up and move along, just like everybody else:

About 10 yards further down the sidewalk, the Clean & Safe crew eventually had to stop hosing, while the cops were called to attend to a man who had passed out and at first, didn't seem to be going to wake up. After five minutes he was eventually roused and hauled off in a police car.
On the one hand, I can accept that the city's business leaders want to present an attractive face for downtown consumers. But when they're hosing down the sidewalk outside a shelter that's already full, and showing apparent disregard for the welfare of those on that sidewalk with severe medical conditions, I wonder what messages we're really sending to the suburbs? I wonder whether a Beaverton soccer mom would really be comfortable knowing that by spending money in our downtown shopping malls, she was inadvertently sponsoring that kind of activity?

The heat from the fire
Silhouettes the dancing shadows
Cast from us huddling to stay warm
My stiletto heels begin to dance with the pounding of my heart
And my hair weeps down my chest
So it calls a memory soaked after
The electrical storm as we
Sit in our helpless shelter
And bring on the infinite boredom
Beginning to appreciate
Each other's warmth
How I would spend this moment over and over
And hope this night would never end.
Posted by Joe Anybody at 4:25 PM

Hello my friends,
I am passing along a link to a short "trailer" that looked really good
The video is only 10.oo$ ... I wish I could order it.
Maybe I will get it later
Meanwhile check out the short out-take
http://freedomtracks.com/udtrailer.wmv

Click below for Elkton, Maryland newspaper followup story
http://freedomtracks.com/elkton.html
Posted by Joe Anybody at 9:24 PM

Tent Cities on the rise

The economic bailout plan being debated in Washington is coming too late for one small, but growing population of America.
In the shadows of Reno's high-rise casinos, one community lives with almost nothing. dwelling in tents.

Nevada's unemployment rate is at a 23-year high. In Reno, the number of jobless jumped 60 percent in the last year.

Now for 170 people, their home is nothing more than a tent.
"I know that god is going to take care of me," one resident said. "But some days, it's very scary."
Whether it is the blaring train or the blazing sun, life is not easy for the mix of chronically homeless, and those newly so.

Just last Christmas, Michael Moore and Marian Schamp (as seen in the video) lived in a rented house in Portland. After Mr Moore lost the job he had had for three years at a gas station, the pair moved to Reno in search of jobs. However, they never found any.

Across the US, tent cities have either popped up or expanded in places like Seattle, Portland and Columbus.

The problem got so bad in Reno that officials decided to organise the tent city and run it themselves.

They put up fencing, brought in security and fresh running water until they can move the people into housing or shelters.

The complete article is from here:
http://www.3news.co.nz/News/InternationalNews/IncreasingnumberofAmericanslivingintentcities/tabid/417/articleID/74225/cat/61/Default.aspx