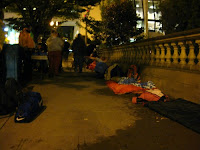 http://tinyurl.com/y9l4ppb
The Homeless protest Vigil at Portland City Hall is "back"

For the second time in less than two years, a group of homeless people are camping outside of City Hall to protest an ordinance they view as criminalizing and stopping them from getting a good night’s sleep.
Beginning at 9 o’clock this evening, 20 individuals set up their sleeping bags and other belongings along the southern side of the front entrance of City Hall. Art Rios, who is organizing the protest, says that the people are camping this year for the same reason as they were last year.
“We want the anti-camping ordinance to be suspended,” he says. “We want a campsite that’s safe.”
The anti-camping ordinance is a city-wide ordinance that bans camping on public property. Homeless people and many advocates says the ordinance criminalizes homeless people who are forced to sleep in public spaces at night because they do not have access to shelters or other places to sleep.
For three weeks during May 2008, a group of homeless people ranging in size from 40 to 120 people protested and camped outside of City Hall to protest the anti-camping ordinance and the sidewalk obstruction ordinance (known as the “sit-lie” ordinance), which illegalized sitting or lying down on the sidewalk during the day. In June 2009, that ordinance was ruled unconstitutional by Judge Stephen Bushong in district court.
Rios says that he plans to have organized camps at City Hall Monday through Friday, 9pm to 7am. That, he says, is enough to get eight hours of sleep, but also will not “interrupt City Hall’s business,” as well as get the attention of politicians, advocates, bureaucrats and the public.
“I want to show the City…that a camp size of 10 to 15 people can be here and not bother their day to day process,” Rios says.
There is currently a sub-group of the Coordinating Committee to End Homelessness, the group charged with implementing and overseeing the City’s 10 Year Plan to End Homelessness, that is currently looking at ways for homeless people who do not have access to shelter to sleep outside at night. The group is hoping to some of those proposals in place in the next three to six months. Rios is skeptical.
“I hear about all these proposals, and there is no action happening,” Rios says.
Check the October 2 edition of Street Roots for more information about the City’s efforts, as well as more information about the protest.
By Amanda Waldroupe
This article was originally found and written for STREET ROOTS
http://streetroots.wordpress.com/2009/09/28/breaking-news-homeless-people-camp-and-protest-once-again-at-city-hall/

More on this topic and related links on Portland Indy Media Here:

This work is in the public domain

Now that Fenty has closed Franklin Shelter and other shelters seem about to close, Mayor "Two Face" Fenty seems to have ordered the police to declare war on the downtown homeless. So far Fenty has failed in this, to the consternation of certain businesses in places like Chinatown.
From Eric Sheptock:
The Unwelcome Homeless

It's no military secret -- the homeless are America's most unwanted.

What's most disturbing about this news is that our public officials are often the ones leading the charge against the homeless.Most homeless advocates wouldn't take offense to any reasonable request, such as wanting a homeless person to be presentable and well-mannered; but the mentally ill are one of the most underserved populations in the city, often leading to some very public psychotic episodes. And many of the homeless wouldn't loiter around businesses and other public places if they had somewhere to go.

But, as this most recent article pointed out, DC Mayor Adrian Fenty closed the Franklin School Shelter on September 26th, 2008 and is now shutting down the Permanent Supportive Housing Program (Housing First). Insomuch as the Franklin closure was predicated on the creation of Housing First, this amounts to a bait and switch and to dirty politics at their worst -- leaving the homeless with nowhere to go.

As a matter of fact, the two parks that were pictured in the article were Franklin Park (which is right across the road from the now defunct shelter) and McPherson Park (which is one block from Franklin Park). Both business owners and tourists alike are bothered by the existence of homeless people in these locations -- the former because it "interferes" with business and the latter because they expect the poor to be treated better in the capital of the wealthiest nation in the world.It is not just the business community around Franklin Square that wants the homeless gone.

Several homeless people were put out of the food court at the One Judiciary Square government office building on September 9th, 2009 -- some having just made purchases. I just happened to be exiting the subway system nearby as they spoke to security and the cops. The homeless told me stories of abuse and of their rights having been violated. Upon further investigation, I found out that, just days earlier, the mayor had met with entrepreneurs from around Chinatown and Union Station.

They asked him to do for them what he had done for the businesses of Franklin Square, by getting rid of the homeless. The mayor then gave police the order to clear the homeless out of this part of town, which accounts for the incident at the food court. Oddly enough, one week later the Examiner article pointed out that the homeless are still present in that part of town. The mayor hadn't done what they gave him credit for doing after all.It is not just the homeless who have fallen victim to the anti-poverty policies of the mayor.

In July of this year, Mayor Fenty threatened to cut off the benefits of women receiving TANF (Temporary Assistance For Needy Families) if the mothers receiving $428/month through this program fail to seek employment. He is also slashing programs that enable those women to receive daycare for their children. Without daycare, the mothers of young children can't go to work and are left to wonder when those in government will make the connection.Tensions continue to build between the business owners who have the mayor as their champion and the poor of DC.

It is only a matter of time before things boil over into a major incident. The poor from across the city are spewing words of anger and hatred at the mayor. Protests against the Fenty administration's policies are being organized. The homeless are seriously discussing the possibility of open conflict with the police. As economic conditions continue to worsen (in spite of Bernanke's optimism), we're left to wonder just when people will reach their threshhold and unleash their wrath.

As for my part, I've instructed the homeless to come out in mass whenever the police bother any one of us or violate our rights. For the moment, all we plan to do is to stand together in large numbers and hope that's enough to send a strong message that we are tired of being pushed around. Time will tell.