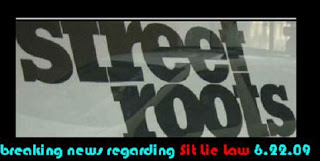 A ruling today coming from Multnomah County Courts tells The city of Portland that "they are unconstitutionally exceeding the city's authority, regarding the sit/lie law." The following report was found on (Portlands) Street Roots website

sit lie law
I re-posted this on Portland Indy Media at 6:45 PM The news just came out four hours ago. It looks like the state law over rides the cities inept law The original article is here from Street Roots breaking news: link to streetroots.wordpress.com (3:00 P.M.) Multnomah County Circuit Court Judge Stephen K. Bushong has ruled that the city of Portland's sidewalk-obstruction ordinance - commonly referred to as sit-lie, unconstitutionally exceeds the city's authority.

The ruling was released today, and grants the motion to dismiss a sit-lie case being defended by attorney Clayton Lance. "This ordinances has been found unconstitutional on three separate and distinct ground," Lance told Street Roots. "That's a heck of a lot of unconstitutionality for one little ordinance out of the city. It just is not going to work and they just keep trying to make it fit, and it will never be able to fit in my opinion." The sit-lie law prohibits sitting or lying on downtown sidewalks between the hours of 7 a.m. and 9 p.m.

The city has maintained it is to keep the sidewalks free of obstructions. Records show that the majority of people cited under the law are homeless. Judge Bushong ruled that the city's law conflicts with and is preempted by state law; State v. Robison, which Lance says already allows the city to penalize people for obstructing sidewalks.

"The (sit-lie) ordinance does not at all deal with obstruction. That's a myth," Lance said."It was to move the transient and the homeless because the transient and homeless were sitting on the sidewalks in downtown Portland. Nothing else." As Lance noted, this is the latest round in the city's failed attempts to institute a sit-lie law.

In 2004, Multnomah County Circuit Court Judge Marilyn Litzenberger ruled that the city's 2003 version of the ordinance was unconstitutionally vague and overbroad. The current version was a response to that ruling with more specific information on what was and was not prohibited. The Court of Appeals further ruled that the 2003 version was preempted by state law, the same as Bushong's ruling.

"In the United States, we fundamentally respect the rights of individuals to meet, to assemble, to communicate and to use public property. And (the city's) attempts at curtailing those fundamental rights have been unconstitutional every step of the way."

It is altogether likely the city will revise its ordinance for another round. Lance says he is ready to defend any charges under the ordinance for free. "Because of social justice and compassion," Lance said. "We need to have social justice and compassion. And this law lacks that completely."
contribute to this Portland Indy Media article
Yay!
22.Jun.2009 20:53
Yay!
link
Yay!
A long time coming
22.Jun.2009 21:15
Paco
link
At last: Take one for The People!
Posted by Joe Anybody at 7:52 PM

My Homeless Videos are here

I have a page on Joe-Anybody.com that is just for my videos that document the homeless and their on-going battle for dignity and justice... not to mention their civil and human rights as well!

The page with all my videos is right here:
http://www.joe-anybody.com/id146.html
Posted by Joe Anybody at 8:13 PM