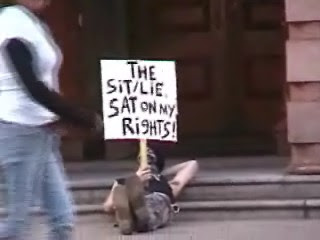 Over on my ZEBRA 3 Report blog http://zebra3report.tripod.com/zebra3report/index.blog/1657008/homeless-protest-and-joe-anybody-is-there/
I have posted a link to some of my videos on this isue
They were taken while a homeless protest was going downtown

It was peaceful and to the point, I support their agenda
So far I have two videos One is on YouTube and is the first part
The second is on Google and is the City Hall part

This ordinance I think will target homelessness in a criminal way
So zip on over and check it out there is links to the Indy Media post on this too.
~joe
Posted by Joe Anybody at 1:00 AM No comments:

Homeless In Portland? Is it getting better in 2007?

So here in Portland in Oregon
There is some chatter in the local paper
That there are improvements in getting
People of the streets, some what debatable
In the detail.... Yet I think maybe we are seeing
Some slight change ..... I am a million miles up ....
Maybe I am being optimistic.......
Here is the story that I am basing some of my opinion by:

City Commissioner Erik Sten, who spearheaded the plan in December 2004,
said last month’s unduplicated count of people sleeping outside in Multnomah
County and the cities of Portland and Gresham came to 1,438. In 2005, the number
was 2,355. That’s a drop of 917 people, or 39 percent.
Both counts were taken during the last week of January. Fifty-seven outreach agencies took part in the count two years ago, tallying everyone who slept on the street, in a vehicle or an abandoned building.

About 200 agencies took the most recent count, so if
anything, city officials expected to see a much higher number of people
identified as homeless this time around. The city saw an even greater drop in
the number of people identified as chronically homeless, which means having a
disability and being homeless for more than a year or four or more times during
the last three years. In 2005, that number came in at 1,284. This year, it was
386. That’s a decrease of 918, or 70 percent.

Sten said he’s pleasantly surprised by the results, and credits the work of outreach agencies and the city’s new “housing first” strategy – which shifts the focus from shelters to permanent housing, where people can stabilize their lives before they are
connected with jobs and other services. “It’s really energizing,” Sten said.

“The community’s been working hard; we know we’ve been making progress, but
sometimes you make progress but the bigger trends keep getting worse.”
Some people on the front lines question the numbers.

Israel Bayer, director of the Street Roots newspaper, which covers homeless issues, said he hasn’t noticed any dramatic drop-off of people downtown. “I think that while they’re doing a great job at putting people in housing through the 10-year plan … I’d find it hard to believe there’s a 40 percent drop in homelessness in Portland,” he said.

While Street Roots took part in the count, he said, “I would question
how well they did outreach on the ground level. … I would argue there’s as many
people entering homelessness as there are being housed.” Marc Jolin,
executive director of the nonprofit Join, one of the lead agencies that took
part in the street count, said he his organization alone has helped place over
750 people into housing over the past two years, and he has no doubt that the
city’s plan is working.

But he cautions against using the latest numbers as a true account of what’s happened on the streets. There were differences in the way the surveys were worded each year, and a more stringent definition for chronically homeless was used this time around.

Sten admits there are a lot of external factors, but the drop of about 900 people does correlate with the number of chronically homeless the city moved into housing during 2005 and 2006: 1,039 people. Some of those people moved into the 480 new units of city-supported housing. Others moved into other affordable housing or private units throughout the city.

With the city’s lack of affordable housing, Sten said it’s getting tougher to find spots to place people. But he hopes to work more with private landlords to move people into vacant units by providing rental assistance.

In the city’s current budget process, Sten said he will ask for $3 million in ongoing funds for homeless programs, in place of the $3 million in one-time funds that have been supporting many of the pilot programs. He’ll also look for continued support from churches, jails, hospitals and corporations such as the Portland Trail Blazers.

Posted by Joe Anybody at 6:21 PM No comments: