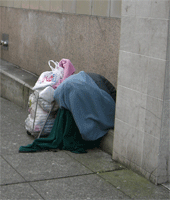 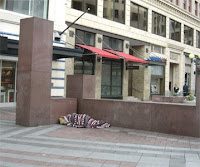 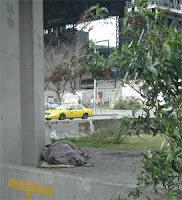 
Seattle, WA 2008 (Photo: K.Anderberg)
When I've been homeless, the hardest part has been the lack of privacy. The *privilege of privacy* is something many take for granted, but for those of us who have experienced homelessness firsthand, privacy becomes a mindset, rather than a physical reality. And that fortress of privacy within one's *mind* adds to the wide chasm between the housed and the homeless, often making homeless people seem "crazy" to housed folks. And when one has been forced to make *mental* doors that shut, since physical doors to shut for safety are nonexistent, it is as if there is a change to one's soul.

Homeless people are burdened with an obligation to hide, while given no privacy. Often homeless folks learn to "hide" mentally, like an ostrich hiding its head in the sand. It is a sanity tactic, even if it appears "nuts" to people with privacy privilege. The ability to shut a door with 4 walls is something many take for granted. Such privacy affords a human a moment to let down his guard, emotionally and physically. Physical privacy allows a person some rest, a moment to rejuvenate. But homeless folks never get that moment to relax, let down their guard, and rejuvenate. Kept on alert at all times, guarding all belongings, and self, in public, is exhausting, both physically and mentally.

To many people who have been homeless and lived on the street, getting away from people is their greatest dream. Already tainted as untouchables or the unwanted, people have collectively left a bad taste in many homeless people's hearts. And the constant exposure to other people is as eroding as any physical weather elements. Honestly, I found the constant exposure to people to be much more dangerous to my mental and physical health than the exposure to cold, rain, etc., when homeless.

This human need for privacy to regroup, to heal and recover from life's traumas, to feel safe, emotionally and physically, is something the "housing first" movement understands. A movement to HOUSE the homeless, with no strings attached, is a big step forward, being promoted by organizations such as "Pathways to Housing" (http://www.pathwaystohousing.org).

"Pathways" says it is inhumane to hold homeless people *hostage* with these obligations to get stable BEFORE receiving help with housing. And it is true that many people WITH housing, and large incomes as well, cannot conquer their drug addiction and mental health issues. So to ask low-income folks who are homeless to conquer those demons FIRST, as a prerequisite for housing, truly is cruel and inhumane.

"Pathways" believes "only housing cures homelessness." That sounds so simple, but it is quite profound. They are saying that the issues of drug abuse, mental illness and homelessness are separate. They are saying those 3 issues entail separate remedies, and that the remedy for homelessness is actually quite simple compared with the other issues. Curing homelessness merely entails providing stable and secure housing for the homeless. "Pathways" provides permanent housing of the tenant's choice, and then offers voluntary, not mandatory, programs to help tenants with other issues, such as drug addiction or depression.

"Pathways" understands that when homeless, survival is first and foremost. Self-improvement tales a back seat to survival, when homeless. By giving homeless people some privacy, some alone time, and some safety, and by giving them a *physical* door, so they can open the *mental* doors they shut long ago, "housing first" programs are healing the souls of homeless folks.

I am saying I believe the thing homeless people often crave, miss, and desire most, is PRIVACY. Often privacy is the most necessary missing element for the recovery of a homeless person's hope and faith, and a return of their dignity. Often privacy is the missing prerequisite for peace in the souls of many homeless people. The privacy becomes a symbol of safety, even. We come to know we are safe, because we have privacy.

Although many homeless people appear to be anti-social, due to shutting emotional/mental doors to compensate for no physical doors to shut, I think there is a process to opening back up to people, to trusting again, to re-integration...and ironically, getting alone time, and privacy, can be the first step to overcoming anti-social behaviors.

I was a homeless kid: in institutions, foster care, as a homeless teen. The message I got was I was an unwanted party crasher on this planet. I was taught to hide myself in this society as a child. I have been homeless as an adult in my past, as well. I have reoccurring nightmares involving doors. I will rent an apt., move in, then realize the front door has a 10 inch gap under it, between the floor and its bottom, making it easy to enter under the door, even when locked. Or I move into an apt. and the front door literally falls off when I shut it, as if it has no hinges, etc. My father broke down my locked bedroom door in a drunken rage in my teens. As a child in MacLaren Hall, a torturous holding place for unwanted and severely abused children in Los Angeles, I had no privacy, no doors to lock out the violent guards and children who were acting out what they had seen adults do to them. Doors are a big thing to me....and many others like me.

Locking doors are a privilege. If you don't have physical locking doors, you will make mental locking doors, as exemplified by the "bag lady" who appears oblivious to those around her in public. Mental doors are a form of *sanity*, not insanity. And as I've said, and as people at Housing First programs have come to understand, homeless people cannot safely open locked mental doors until there are safe physical doors to replace them.

Tent City residents gather as the city of Ontario starts the process of sorting out who may stay and who must leave. The city issued wristbands – blue for Ontario residents, who may stay, orange for people who need to provide more documentation, and white for those who must leave. The aim is to reduce the number of people living there from over 400 to 170.

Officials begin thinning out the encampment, saying the city can provide space only for those who once lived there and can prove it.


Dozens of Ontario police and code enforcement officers descended upon the homeless encampment known as Tent City early Monday, separating those who could stay from those to be evicted.

Large, often confused, crowds formed ragged lines behind police barricades where officers handed out color-coded wristbands. Blue meant they were from Ontario and could remain. Orange indicated they had to provide more proof to avoid ejection, and white meant they had a week to leave.


Many who had taken shelter at the camp -- which had grown from 20 to more than 400 residents in nine months -- lacked paperwork, bills or birth certificates proving they were once Ontario residents.

"When my husband gets out of jail he can bring my marriage certificate; will that count?" asked one tearful woman.

Another resident, clearly confused, seemed relieved to get a white band -- not understanding it meant she had to leave.


Pattie Barnes, 47, who had her motor home towed away last week, shook with anger.

"They are tagging us because we are homeless," she said, staring at her orange wristband. "It feels like a concentration camp."

Ontario officials, citing health and safety issues, say it is necessary to thin out Tent City. The move to dramatically reduce the population curtails an experiment begun last year to provide a city-approved camp where homeless people would not be harassed.

Land that includes tents, toilets and water had been set aside near Ontario International Airport for the homeless. Officials intended to limit the camp and its amenities to local homeless people, but did little to enforce that as the site rapidly expanded, attracting people from as far away as Florida.

"We have to be sensitive, and we will give people time to locate documents," said Brent Schultz, the city's housing and neighborhood revitalization director. "But we have always said this was for Ontario's homeless and not the region's homeless. We can't take care of the whole area."

Officials believe the local homeless number about 140, less than half of those currently in residence. Schultz wants to reduce Tent City to 170 people in a regulated, fenced-off area rather than the sprawling open-air campsite it has become.

No other city has offered to take in any of the homeless who Ontario officials say must leave.

"So far I have heard nothing," Schultz said.

Even before the large-scale action Monday, police last week moved out parolees and towed about 20 dilapidated motor homes. A list of safety rules, including one banning pets, has been posted. The city says there is a threat of dog bites and possible disease from the animals.

The no-pet order caused widespread anger and tears Monday as some homeless people said they could not imagine life without their dogs. Many have three or four and vowed to leave Tent City before giving the dogs up.

"I will go to jail before they take my dog," said an emotional Diane Ritchey, 47. "That's a part of me as much as anything. The dogs are as homeless as we are."

"I had to give up my 6-year-old son because I was homeless and I'll be damned if I give up my dog too," Duke said.

Celeste Trettin, 53, rolled up in a wheelchair. She and her husband have an Ontario address but have lived for years in a truck, parking wherever they found a safe place. Trettin, who got an orange wristband, said she believed she would be able to find the paperwork to prove she was from Ontario.

"We thought if we came here we could save some money, but now they have pulled the rug out from under us," said Trettin, who has fibromyalgia, a painful disorder.
Posted by Joe Anybody at 11:00 AM